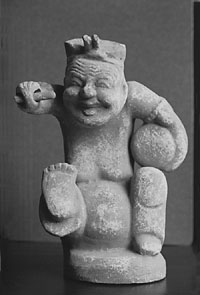 Telling and singing figurines from the Han dynasty

Storytelling in China is a time-honoured art. Some prefer to see the earliest evidence of this art in the so-called ‘telling and singing’ statuettes, excavated from Western Han dynasty (bc206-ad25) tombs. These wooden or clay figurines look like male entertainers of a sort, with lively gestures and a face full of humour, sometimes with a drum in one hand. What kind of entertaining they represent, and how far they may be compared to the professional storytellers in China a millenium later, is a nebulous question.

In 1957 a so-called ’storyteller figurine’ shuoshu yong was found in a Han tomb in Sichuan, and in 1979 two similar statuettes, called 'telling and singing figurines' shuochang yong, were excavated from a site of four Han tombs in the vicinity of Yangzhou. The 'telling and singing figurines' from Yangzhou were found together with twenty-eight other statuettes, defined as either servants, dancers, jokers or 'telling and singing' entertainers. From the looks of these figures little can be deduced with any certainty about the relationship of their activities to the narration of stories—much less to professional storytelling. Nevertheless, the facial expressions of these two figurines are especially fascinating; they do, indeed, seem to exhibit the enchanted smile of somebody carried away by his own story. One of the important outcomes of the finding of these expressive figures is the impetus they are giving to studies of early Chinese entertainment activities, rather than any proof—so far—of professional storytelling in China during Han times. The naming of the figurines reflects the growing awareness of the difference between the more narrowly defined activity of 'storytelling' shuoshu—professionally performed narration of tales with non-religious contents—and the comprehensive idea of 'telling and singing' shuochang, enveloping all kinds of professional and non-professional oral entertainment.

Next: ’Transformation’ performances from the Tang dynasty